BACK⇒ Return to Table of contents 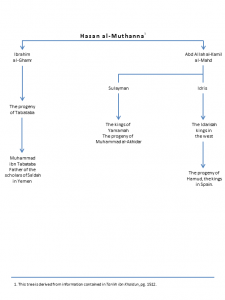 The result when nobility courses through your veins:

I see every branch that sprouts in a tree, refuses to change its essence.

Nobility passed down generation to generation, like a branch which grows on another branch.

And I see nobility does not materialise to perfection in the noble of a nation, if he himself is not the son of a noble.

This noble Imam had exemplary sons whose biographies illuminate the pages of history. We will make mention of a few of them here, a reminder to those who already know and a lesson for those who do not.

His grandfather, Ibrahim, was called Tabataba because his mother would make him dance when he was little and would say to him Tabataba. It has been said that the reason for this name was that Ibrahim would pronounce the letter Ta similar to a Qaf, and once when asking to wear a Qaba’[2] he was told that they would put on a Farajiyyah[3] for him. In protest he began yelling, “No! Taba Taba!” referring to the Qaba’ robe.

An esteemed personality unmatched in his era in terms of his virtue and character. He is amongst the narrators of Hadith and a repository of Hadith in his time. He is also amongst the grammarians of his age.

Amongst his poems is:

He is a jealous person who conceals his groaning, and he always becomes restless and grieved.

He reproaches me when I passionately go to seek knowledge, to gather its various sciences from the transmitters.

He claims that knowledge cannot draw affluence and goes on to entertain good assumptions regarding ignorance.

So, O my reproacher, leave me to become valuable, for the value of each person lies in what he does best.

[1] The descendants of Abu Talib.

[3] Farajiyyah: A long robe with broad sleeves, would often be worn by scholars.

[4] Tarikh al Islam, biography of ‘Abdul Qadir al Jilani rahimahu Llah. There is a difference of opinion regarding his ancestry from the Ahlul Bayt radiya Llahu ‘anhum.